When I first met my wife’s great grandma, she was 91 years old.

She lived on her own in the hills of Kentucky well into her nineties, and she was an even balance between tough and tender.  She was loving and sweet (her first words to me were, “Well, aren’t you just tall and handsome”) but had a funny and sarcastic side to her as well (she’d often lean over to me at the dinner table and whisper some snarky remark into my ear).

I have a number of fond memories of her.  When we’d stay at her home, for example, she would be the first one out of bed and would start banging every pot and pan in the house together while making breakfast (presumably to make sure all of us were awake by the time it was ready).  I also remember watching her overflow with genuine gratitude as she unwrapped a simple coffee maker at Christmas (it showed me I have much to learn about gratitude).

Mamaw, as we called her, really made me feel like a part of the family, even before my wife and I were married.  Now, I don’t know if you’ve ever had the privilege of spending time with someone of that age, but whenever we visited her we did so with the understanding that any visit could be our last.

But, because she was so tough, she lived several years longer.  When Mamaw was 100 years old, my wife found out she was pregnant.  When we told Mamaw she got the biggest grin on her face, and in the months that followed all she could talk about was how she couldn’t wait to hold that baby.  We couldn’t wait either, but as she got older her health issues seemed to be a more frequent nuisance, and we often wondered if our child would get to meet his great great grandmother.

Then, not long before our son was due, she had a stroke.

She survived it and started her recovery in a nursing home, though no one could say whether or not she would fully recover.  Then, in November 2014, our son Micah was born, and not long after that we visited the nursing home and Mamaw got to hold her great great grandson for the first and last time.

She died on Christmas Eve just a few weeks later.

There are a lot of factors that determine when a person is going to die, but my wife and I believe Mamaw may have died much sooner if she hadn’t held on to the hope that she’d get to meet our child. 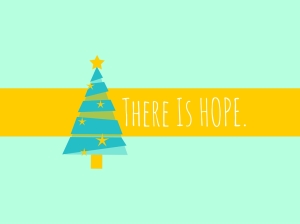 Hope — the idea that there is an unseen future that is greater than our visible present — is a force that tells us to keep on going when everything else is telling us to give up.  True hope, though focused on the future, affects our present in powerful ways.

The problem with hope today is its definition has become weakened by the way it is commonly used.  Most people use hope to describe a type of wishful thinking, but the hope described in the Bible is one of confidence and assurance.  It’s a looking forward to heavenly promises that have been made by a reliable God who has time and time again put his faithfulness out there for all to see.

So this Christmas season, don’t lose hope!  Keep your eyes fastened on Jesus, the hope of the world.  Those in the Old Testament were motivated by hope in God’s plan to rescue the world, even though they didn’t get to see it materialize in their lifetimes.  But today Jesus is on his throne, and we have reason to hope confidently for all of the things he’s promised for the future, because he’s a man of his word.

Correction: In an earlier edit I said Mamaw was 95 when we met, but my wife corrected me.  She was (only) 91!

2 thoughts on “The Great Motivator”