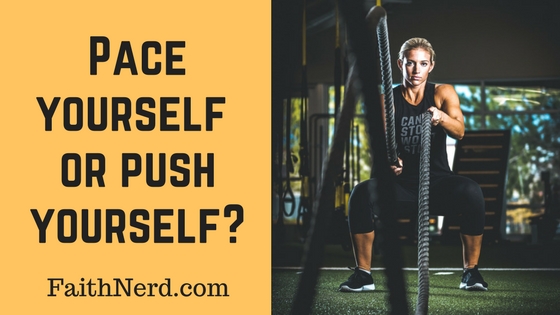 My mom is a marathon runner, and I’m a martial artist.  She’s used to running for hours at a time, whereas I’m used to short explosions of hand-to-hand combat.

But if you think about it for a moment, you’ll realize both kinds of athletes need to learn how to both pace and push themselves in order to be truly successful.  Marathon runners have to pace themselves, but in training they must gradually push themselves, otherwise they will never achieve faster times.  Martial artists must push themselves, but if they expend all of their energy at the start of a fight and fail to defeat their opponent quickly, they’re going to be in big trouble.

So you see, neither of these approaches is bad, unless you completely exclude the other.

There are some people who use “pace yourself” as an excuse to never rise above the challenges they face, to never test the limits of their potential.  Just when they’re about to break a metaphorical sweat over the work they’re doing in their lives, they quit in the name of not doing too much too fast.

Then there are those who push themselves not simply because they are hard workers, but because they don’t believe in the value of consistency.  They work really hard at achieving their goals for a short while, expecting progress to come quickly, but they burn themselves out and yo-yo between grueling effort and extensive, unproductive rest.

So find the balance in your life.  As a believer, I think that balance comes when we really start trusting God and the plan he has for our lives.  Trusting God means I don’t have to push myself past my breaking point, because I believe God is working even when I’m not.  It also means I’m motivated by the purpose for which he has created me, and I’m ready to push the limits of what people perceive to be possible because all things are possible with God!