Good stories are more than just entertainment; they have the power to be life-changing. Jesus understood this, and at times chose to let his illustrations be the sermon rather than just a part of it. In his parables he spoke of what were most likely some fictional characters and events, yet his works of fiction conveyed more truth than the combined contents of stacks of autobiographies.

From now on that will be the focus of Faith Nerd Blog: keeping an eye out for God’s truth in stories, especially works of literature. It’s a blog at the intersection of reality and make believe, reading everything through the lens of the Gospel. 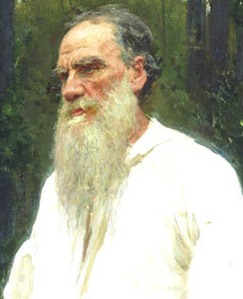 Leo Tolstoy wrote a great little story called “The Three Questions” in which a king theorizes he can avoid failure if he knows three things: the right time to begin everything, the right people to listen to, and the most important thing to do at any given moment.

He surrounds himself with wise men who try to answer the three questions, but they have conflicting ideas so he decides to consult a hermit who is known far and wide for his wisdom.

The king disguises himself in order to talk to the hermit because the wise man will only receive “common folk.”  The hermit is digging in the ground in front of his hut when the king approaches to ask his questions, but when the hermit doesn’t answer, the king takes the spade and offers to dig a while so the hermit can rest.

After hours of working the king becomes impatient.  He demands the hermit answer his questions, but just as he does so a man runs out of the woods bleeding from his abdomen.  The king washes and bandages the wound as best he can, but the blood keeps flowing.  So again and again he washes and bandages the wound, until finally the blood stops and the man’s life is saved.

By this time the sun has set and the wounded man is thirsty, so the king brings him some water and, with the help of the hermit, carries the man to the hermit’s bed to let him rest.  Afterward the king is so exhausted from his hard day’s work that he falls asleep.

When he awakes in the morning, the king finds the wounded man already awake.  The man apologizes to the king, not because he had been an inconvenience, but because he had actually come into the woods to avenge his brother’s death (and the loss of some property) by killing the king!  He had been wounded by the king’s bodyguard while on his mission, but is both grateful and astonished that his enemy would take such good care of him.

The king not only forgives the wounded man, but says he will send his own servants and physician to care for him and will restore the lost property.

The king is happy to have made peace with his enemy, but still has some unanswered questions.  He asks the wise man one last time to answer his questions, and the man responds, “You have already been answered!”  The king, still confused, seeks more clarity, so the old man explains:

“Remember then: there is only one time that is important– Now! It is the most important time because it is the only time when we have any power. The most necessary man is he with whom you are, for no man knows whether he will ever have dealings with any one else: and the most important affair is, to do him good, because for that purpose alone was man sent into this life!“

I love the message this short story delivers: one of the most important things you can do is live in the moment.  Even believers, who have the hope of eternal life in them, have to keep in mind that while heaven and perfection are our future we still live in the now, so we can’t neglect it or the people in front of us.

The most important time for you is right now.  One of my personal mantras is, “You only have today.”  It’s a constant reminder that you can plan ahead and reflect on the past, but you can’t possess any moment but the present.  So go out and carpe the crap out of your diem!  Don’t rest on the laurels of your faith by over-reflecting on what God did yesterday or get stuck waiting on what He’ll do in the future.  Today is the only opportunity you have to act.  Right now is the only time you have any power.  Use your now wisely!