A few years ago my wife and I took our dog, Bear, to a local dog park to play and swim.  Despite being an intimidating 85 pounds at the time (he’s a Newfoundland mix), he was a big-ol’ lover who wouldn’t even bark at a fly, let alone hurt one.

But something changed that day.  At the park there was one dog who towered over him, a Great Dane puppy that was young and eager to assert his dominance.  The Great Dane wasn’t growling or biting, but he incessantly tried to mount Bear, and on several occasions did so in the water, pushing Bear under, leaving him gasping for air.

Each time this happened we tried to  put an end to it as quickly as possible, but the damage was done.  From that day on Bear had the equivalent of puppy PTSD.  We tried taking him on walks in public places, but every time he passed another canine, no matter how big or small, the hair on the back of his neck stood on end and he growled and snarled and tugged on his leash.

It was heartbreaking.  During this time Bear never showed any aggression toward humans, but because of his size and his behavior toward all other dogs, we decided for a long time to not walk him in public.  We couldn’t trust him.

That is, until recently. 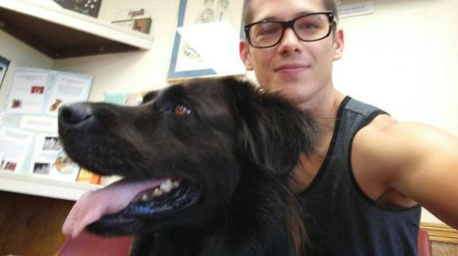 Recently I started taking Bear on walks up and down our road, a quiet “no outlet” street in the country.  I thought it would be a good idea, because he really needs the exercise and companionship, and I rarely see anyone walking another dog down the road.

We had almost made one full lap down and back, when suddenly a little terrier came sprinting off of my neighbor’s front porch, aggressively growling and barking at Bear.  It all happened so fast I didn’t even react.  I felt a paralyzing pang of fear, and I just held my breath.

The little dog came nose-to-nose with my monstrous beast, but Bear didn’t bite or growl or anything like that.  He simply wagged his tail.

I seized the moment, tugging gently on the leash and saying, “Come on, Bear,” and my dog trotted up beside me as the terrier returned to its stoop.  I was as proud as a father watching his 6th grader graduate from elementary school.

The next day, during another walk, the same thing occurred.  A dog (this time a larger one) ran aggressively toward Bear, and again Bear passed the test.

I don’t know what changed in Bear’s mind.  I don’t know if time caused him to simply forget what happened with the Great Dane, or if he simply has more courage now, but what I do know is this: I can trust him again.  Why?  Because he’s passed the test (twice).

I believe that God wants to trust us with more, too, but he won’t do so until we show we can be trusted with what he’s already given us.  We have to pass the test we’re currently taking before he’ll give us a harder one.

In Matthew 25, Jesus tells a parable in which a man is going away on a long trip.  Before he leaves, the man gives his three servants some money, trusting that they will invest it wisely and earn more for him while he’s away.

When he returns from his trip the master finds that the first two servants generated more money for him, prompting him to declare about each of them, “Well done, my good and faithful servant. You have been faithful in handling this small amount, so now I will give you many more responsibilities.”

The third servant, however, failed to use well what he had been given, prompting the master to take the seed money away from him and give it to the first servant.

“To those who use well what they are given, even more will be given, and they will have an abundance,” the master says.  “But from those who do nothing, even what little they have will be taken away.”

But can you be trusted with what God has already given you?  Are you passing the test?  Even if you feel like he hasn’t given you much, are you using whatever time, talent, and treasures he’s provided in a way that honors him?  If not, can you really be upset if he doesn’t eventually (whether on this earth or in the Kingdom to come) give you more?