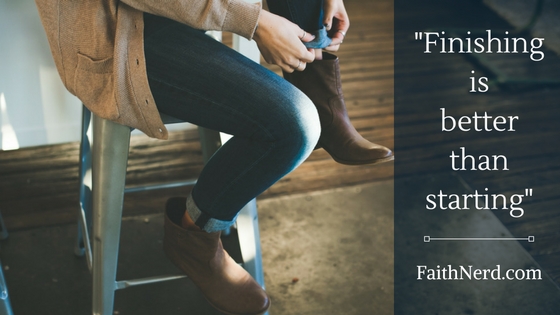 In between my sophomore and junior years of high school I quit playing soccer so I could focus exclusively on becoming a better wrestler.  I decided it is better to be great at one thing than to be average at two, so I threw all my energies into wrestling training that summer, and it really paid off.

As the first big tournament of the season approached in the winter of that year, I was confident I was going to make a splash despite entering the tournament unranked and generally unknown.  I knew how much hard work I had put in leading up to that season, and I was ready to roll.

I won my first match easily, if I remember correctly, but in my second match the tournament organizers paired me up with the number one seed, the guy who was supposed to become the tournament champion.  I was nervous, but I knew I was going to put up a fight. 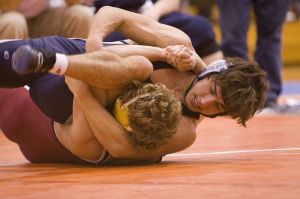 Photo credit: washer_dreier on Flickr (No, that’s not me in the picture.  It’s just a generic wrestling photo for flavor.)

I went out on the mat, faced off with my opponent, and boom!  He started kicking my butt all over the place.

By the end of the second period I was losing by a score of 8-1, and when I went over to get advice from my coaches between periods I don’t think they had much to say.  The kid was just too good.

The third and final period started out much like the other two, with my opponent grinding my face into the mat.  All seemed lost, until for a split second I looked up and saw that he had made a mistake.  He had put himself in a bad position to where I could put him on his back, and a moment later I had him pinned — I won!  Despite the fact that he had gotten off to such a great start, he made a big mistake and failed to finish well.

Recently God has been teaching me a lesson from Ecclesiastes 7:8, which says,

Starting off strong is great, and important.  The momentum from a strong start to anything can carry us far.  But so many people don’t finish well because they aren’t patient enough to see their work through! 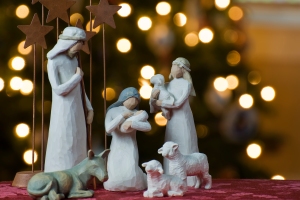 Christmas is coming up in just a few days, and Christmas is all about fast starts and big-time beginnings.  It’s about the beginning of Jesus’ life here on earth, and the beginning of our greatest hope.  It’s truly a spectacular story, filled with prophecies, miracles, angels, and grown men and women praising God for the newborn Savior of the world.

But if the only spectacular thing about Jesus’ life was his birth, we’d all still be screwed.  He was welcomed into the world with great anticipation, yet the real success of his story is that he stayed faithful to God and to his mission all the way through the cross, where he died for the sins of the whole world.

If Jesus doesn’t stay sinless, if he doesn’t make it to the cross, we have no hope for eternity.  Because of sin we are all born into a place of spiritual disadvantage, but thank God for Jesus whose death opened the door for our victory!  He didn’t just have a spectacular beginning.  He finished well too.

Don’t give up.  Even if you feel like you’re down 8-1 in the final period of your life, Christ has opened an opportunity for you to be victorious.  No matter how you started, I encourage you to finish strong, because “Finishing is better than starting.  Patience is better than pride.” 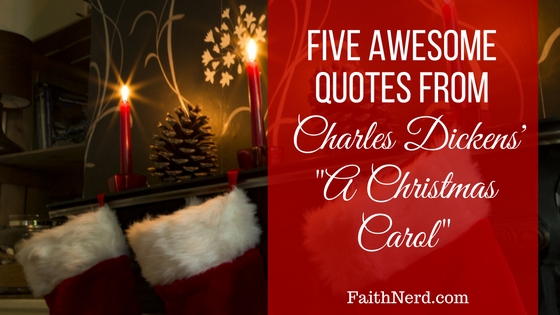 If you’ve never had the opportunity to read Charles Dickens’ A Christmas Carol, I want to encourage you to do so this Christmas season.  We’ve all seen this story in one form or another on TV (my favorite version features the Muppets), but there are corners of the heart books seems to touch that films simply cannot.

Here are my five favorite quotes from the book: 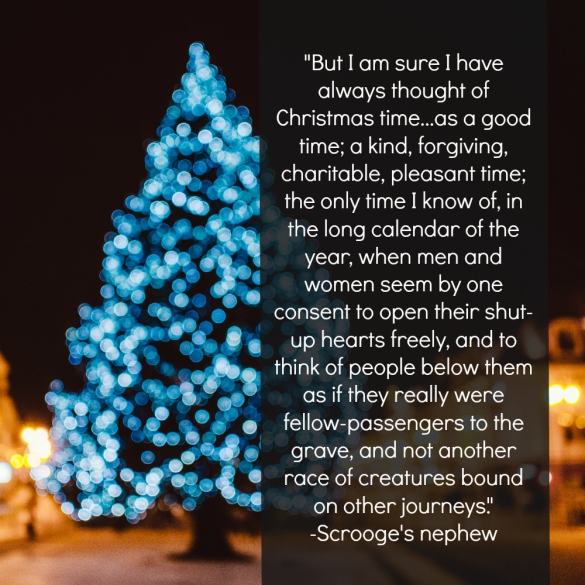 That last part really hits me in the gut.  It’s both sad and encouraging.  We’re all “fellow-passengers to the grave,” so why show favoritism toward one person over another? 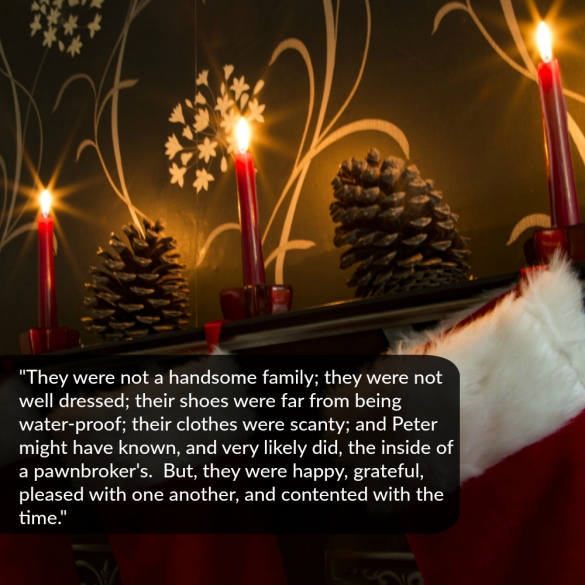 One of the things I’ve been really learning from the Bible lately is that it is better to be content with what you have than to constantly want something else.  I mean, if you’re happy with what you have, why spend so much time and energy struggling after something you don’t need, something that won’t bring you satisfaction? 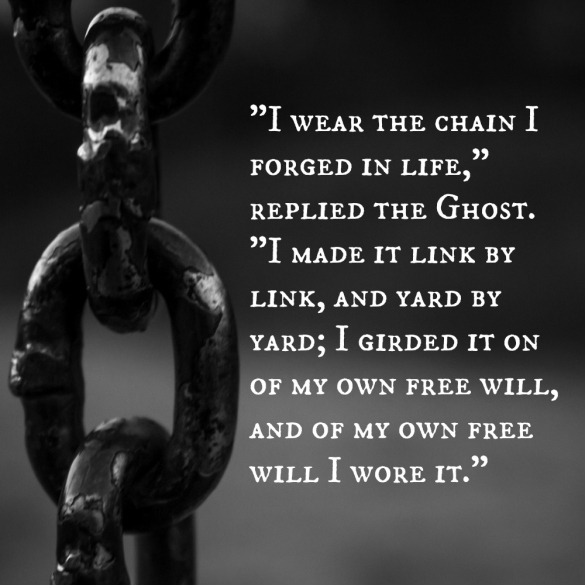 This one’s all about personal accountability.  We can choose what we want our lives to be, and what our lives consist of in this life will ultimately impact what our lives are like in the next.  We’re either building chains for ourselves, or breaking them through the power of Christ.  Which are you doing? 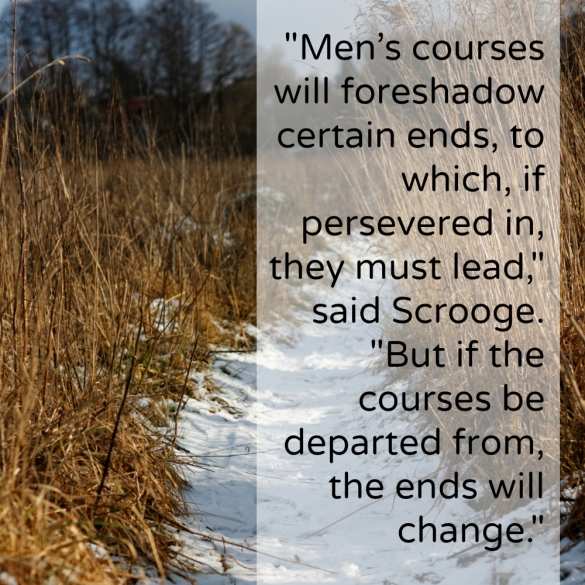 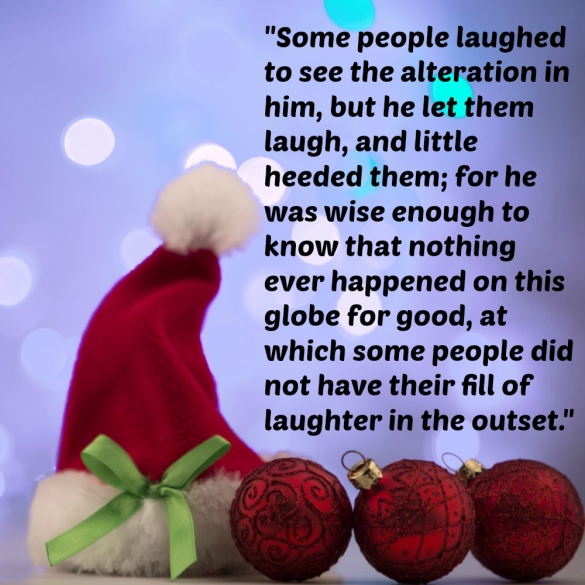